Partners in Crime: Sid and Me

There always comes an end in a journey of wandering souls and the beginning of something new. For us it will be the fact that Sid is getting married in 2011. This was something of a last journey together. Something of a memoir to remember life as we know it. Things may not be the same again for both of us, but they won’t be bad. They will be different. The beginning of a new era. A new chapter of life. And what best way to end it than visiting Thailand and Cambodia in a beer-filled haze. Memories of many evenings are but a fraction of what we would usually have. The beer did the trick. We walked with Singha.

The build up to the trip was intense with the amount of work we were squeezing in everyday. That’s the best way to enjoy any trip. Work yourself up to a point of frustration and then you can really take anything that a trip would throw at you. We landed up in Bangkok on the weekend of the Kings birthday. Started off the first day with some awesome Thai food with a friend who was in Bangkok. She helped us out with some of our planning and also took us around to the Chatuchak market. Probably the only place in the world that can beat Khan El-Khalili in Cairo. 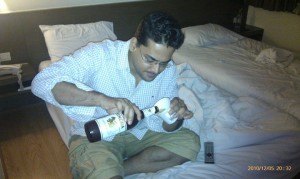 The two days in Bangkok passed by quickly with evening spent in company of Singha beer and thai food. What we were looking forward to was the next leg of the journey. The road trip to Siem Reap, Cambodia.

Monday morning presented a challenge. We had to wake up early and get onto a bus for Aranyaprathet – the border town on the Thai side. A 6:30 AM bus got us started off on the 5-hour trip to Aran. Although the trip was uneventful the border at Cambodia was one big scam. Luckily for us, we had read about it on the internet and being Indians we were used to getting scammed on tourist locations. We are naturally trained to be street smart while going out as tourists.

We got the visa the authentic visa counter of the Cambodian officials (they were very helpful and friendly) and avoided the scams going on  slightly before the border. Next step was to negotiate with a cab driver to take from Poipet to Siem Reap. It was a good 2 hour drive through the country side with small towns along the way – we started off with an Angkor beer which was really awesome. The driver gave us a taste of Cambodia by eating a bag full of insects in the car. Thankfully they were dead and fried – or we would have had a situation.

We slept off the afternoon to be ready for the eventful evening tht followed us. Siem Reap is famous for the number of pubs it has. There is a street near the old market which is called Pub Street. This is half a kilometer long and is lined up with pubs back to back on both sides of the street. There are all different kinds of pubs from Irish to Ghetto to Oriental to Hip-hop.

What followed was a rampage through the street – going to atleast 3 different pubs. At the end we settled at the Ghetto styled pub called “Angkor What?”. Funny name we thought. The bartender was a young guy with stories to tell of his travels. As the bar filled up so did we with beer after beer. We started chatting with some random Canadians and played several rounds of pool with them – of course towards the end we were kind of drunk and barely knew what was happening.

Its funny how closed we are while we meet strangers in our own lands but never exchange a word. Maybe all we share is prejudice for each other. Maybe its the way we’ve been brought up, maybe its the culture in this country. But when we travel we are different people. We are bound by the common thread of backpacking. Of being among the adventurous few. When we travel, we are no longer Indians or Canadians or Americans or Europeans – we are travelers. We share experiences, we share lifetimes. Its those memories that stay with you forever. I still remember my conversations with random strangers in Yulara out in the wilderness of the Australian outback even though its been nearly three years. It is these experiences that define a journey. Its these strangers that make your travels worthwhile. 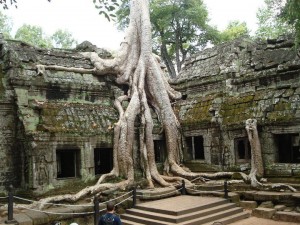 On the second day of the trip we visited the ruins of Angkor Vat. These are the temples and the ruins that have witnessed centuries of struggle and genocide in a land where god abandoned the people. With the towering branches and roots gobbling up the Ta Prohm temple it almost felt as if various secrets are being protected forever. The eerie silence in these ruins weigh heavily on us and after noon and lunch we call it a day. On the way back to Siem Reap we are greeted by rains which are a common thing in afternoon in these parts of the world. The air is damp and we enjoy the ride back to Siem Reap and thank ourselves that it was not a car/ cage, but an open Rickshaw. 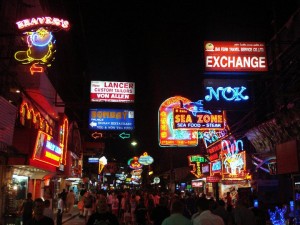 Welcome to sin city. Its a city that lives on sex. Sex is sold on streets, in bars, in hotels, in shops, on the promenade, in the alleys… everywhere. The beach road in Pattaya is something that I will miss the most after the crazy town of Siem Reap. Rows and rows of pubs interjected by small allies – yet again filled with pubs and go-go bars. They all end in one giant culmination called the walking street. Try to walk this street without being felt up atleast once and I will give you a thousand dollars. We walked around on the beach road and walking street, enjoyed all the sights and sounds of Pattaya. 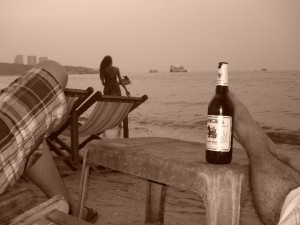 We realised that it was cheaper to buy beer from 7/11 and drink it on the streets. After all it was all legal here. On the beach street, in every direction you look, there will be atleast one 7/11 (except of course in the direction of the sea). After two nights of fun and debauchery we were ready to return to Bangkok and end the trip. 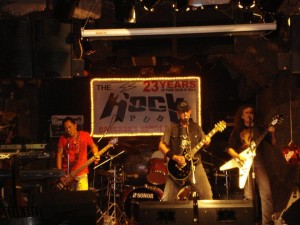 The last few days in Bangkok were uneventful but we had a lot of fun by going to different bars. Last night in Bangkok we went to a pub called The Rock which was really awesome with a live band playing some hits from Metallica and Megadeth. We were almost tapped out of cash by the time we got out of the pub. It was a long walk back to the hotel. 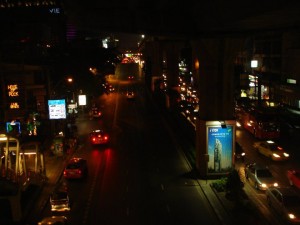 The nights in Bangkok envelop the city in an almost deafening cloak that keeps the good insulated from the bad. The bright neon lights camouflage the distress of the thousand of girls and the desires of men. Under its willing arms, Bangkok conceals a lot. I wonder what we would have discovered beneath the mask and the guise if we had but stayed on longer…..

…. But the secrets would have to wait as we bid farewell to the city that marks the end of an era for us. To new beginnings and to growing up…