What started off as a casual idea of us doing a road trip together soon snowballed into a plan and set off several things in motion. Over the course of 5 months, I got my US tickets, the visa and made a plan to visit my sister in New York. What hinged my trip to my travel philosophy was the lure of the road trip through 4 states. New York, Virginia, North Carolina and Tennessee.

The drivers – Me and a friend from engineering days 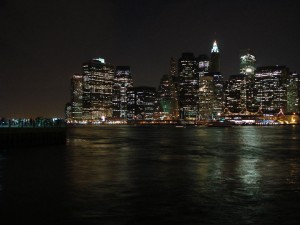 The trip started off with a bounty-hunt trying to find the rental car in the sprawling West parking deck of Newport Mall. As she drove us out of the city, I could almost feel both of us slowly shedding the worries of work, the daily grind, the urban fears, the heartaches and everything that held us down.

When you are in a fairytale town and there are things you want to say, it becomes that much more difficult to hold them down. And I swear I could have cried in that little town. Not out of sadness but out of hysteria at the tipping point of the year that went by, out of the fear of the finite nature of this journey, out of the fear of pouring my heart out. We were living in a fairytale. We were two souls thrown together with a common purpose – to find ourselves through this journey, to find a way out and to change what we could not in the urban chaos. As we walked along the cobblestone streets of downtown Winchester, we saw the quaint little town in all its resplendent beauty. Little bars with happy and content trippers – maybe some travelers. An old man with a very familiar face gave us the best advice on relationships during the trip. The Irish stuff was slowly getting to me. I never wanted to go back, but the alcohol weighed us down after a while and we walked along the dream and back to our room. When I woke up in the morning, I could have sworn that last night was a dream. 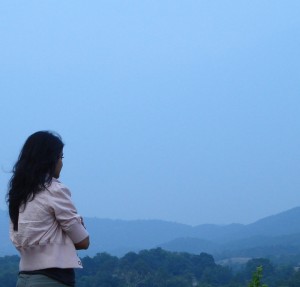 What lay ahead of us was a 100 miles of the beautiful skyline drive in the dreamy Shenandoah valley followed by hundreds of miles of winding roads in the Appalachian range. The day’s target was to reach the only inhabited place along the 600 miles of Blue Ridge Parkway called Doughton Park. A million overlooks rolled by on both sides of the parkway. We stopped at a few to gawk at the sprawling mountain range and appreciate man’s creation jostling for some attention in the selfish show of nature. As I smoked a cigarette at one of the overlooks, I could almost hear myself breathe in that silence that surrounded us. The air, clean at this height and damp with the impending rains.

As I tired after a while she took the wheel only to be greeted by a dense sheet of fog, lashing rains and desolation. I wondered if this was her comeback. She battled the rains as it became a tug of war – sometimes the rain slowed her down and on others she tore through the rain with determination I had never witnessed. After her trial by the rains when I took over, we had a minor fuel scare. We managed to get through the situation nearly scraping the fuel tank in the process after which she slept sound only to wake up at Doughton Park. There was a sense of accomplishment as we opened the bottle of wine and chugged a few glasses before going to sleep.

As I stepped out in the morning, I was greeted by a beautiful panorama of rolling pastures and lonely scattered trees. A quick breakfast at a typical North Carolina deli and we were ready to hit the road again.

Every trip has a purpose whether you set out with it or you find one during the trip. Road trips are designed like that. For some people there is nothing glorious about driving a 1,000 miles to reach a camping destination – however what they don’t realize is that travelers do not seek glory. We do not seek acceptance. All we seek is answers – though we never get them. The day you start getting your answers is the day you stop being a traveler or it’s the day you die. 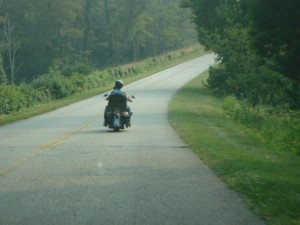 As we snaked along the parkway in the bosom of the Blue Ridge Mountains I knew the purpose of this road trip. Catharsis. I needed to change things about life. I needed to come up with things I wanted to do differently with life. (However, I didn’t come up with a list until later while doing the Highline walk in New York City). What we did come up with were lists of things we both wanted to do before we died. Our bucket lists.

Day slowly turned to evening as we finally slid off the Blue Ridge parkway almost saying a good bye with a heavy heart. We weren’t sure if we would ever be able to come back or if things would be the same if we ever did manage to return. A small Applebee’s diner in a Tennessee town saw us through our lunch and we continued onto the Tennessee Interstate tearing down to Cosby, TN. The goal was the reach the Great Smokey national park before the last bit of sun went out and the black bears came out to play. As fate would have it, it rained that evening and we ended up spending the night in the car – brought back memories of Australia when we spent several nights sleeping in the car. We did manage to light up a fire for a brief period of time and got high enough to be able to sleep it off.

Fourth stop – Gatlinburg and then back to Jersey City (1,650 miles) 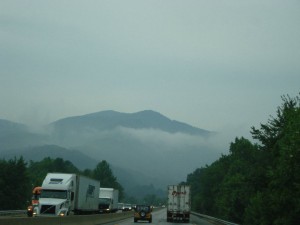 The next day we headed towards another dreamy little town which finds itself ensconced among the high ridges of Great Smokey Mountains. We had an elaborate breakfast after which we started heading back to Jersey City. I found myself feeling depressed through a large part of the trip back, because let’s face it, the thought of a big city invariably has thoughts of the mundane life and the urban chaos associated with it. Though New York City has a charm of its own, I can’t help but feel boxed in. At the same time, the thought of ending the beautiful 4 day journey came bearing down on me. We stopped yet again at Winchester on our way back and we went to the same bar. We couldn’t believe it when we saw the same old man yet again! Winchester lifted up my spirits as we started talking again – talking about our heart-breaks, talking about where life was heading, about a million other things. As we sang along to songs we loved, we rapidly zipped through the Interstate highways at 80 miles an hour. The lights of Jersey City loomed on the horizon and it was time to say goodbye.